COVID can't stop this bull sale from going on 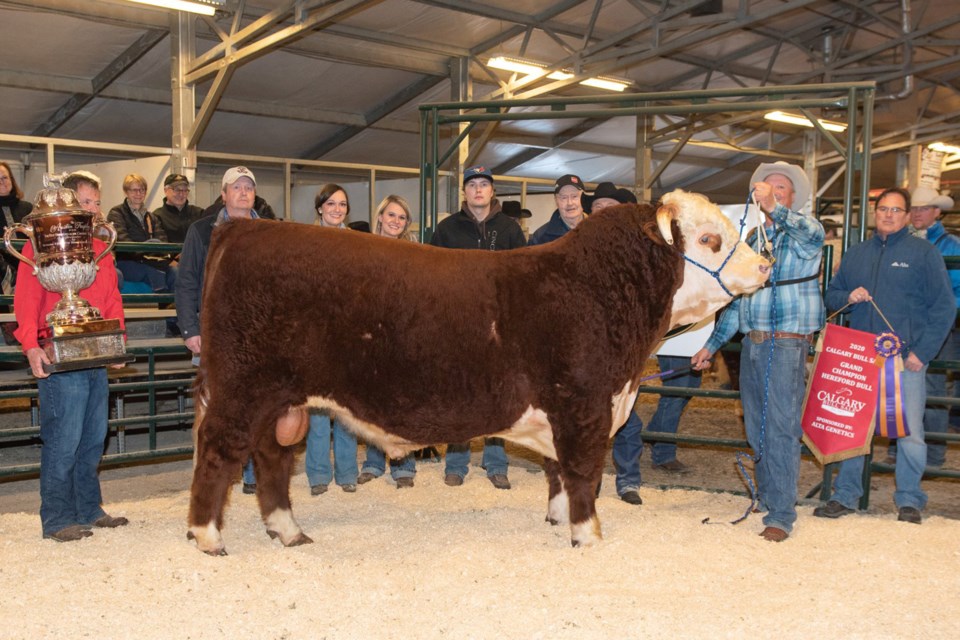 The Second World War was not enough to prompt the cancellation of the annual Calgary Bull Sale, and neither was the COVID-19 pandemic.

The sale has been running annually since 1901, said Judy Finseth, a coordinator with the Alberta Cattle Breeders Association, which puts on the event.

“From my recollection, even through the war years, it ran,” said Finseth, citing the agricultural industry’s vital food production as an essential service.  “This is the first year that it’s really been threatened to not have it at all."

But despite a different format that will lean more heavily on technology and digital platforms, the show — which is scheduled to take place at Century Downs Racetrack in Balzac on March 3, followed the next day by the sale — will go on.

The sale, which essentially sets the bar on the price of the highest quality stock for the rest of the year, draws out about a dozen consigners, including several regional cattle producers who will once again be involved, albeit under somewhat different circumstances.

“The hard part is planning when you’re not 100 per cent sure what the situation is going to be like in March,” she said.  “But we anticipate that we’ll have a limited number of people that will be able to access the site.”

Although attendance in past years has partly depended on the weather, the show and sale has typically brought out an average of about 300 or more people, she said.

Of course as a result of the provincial government’s pandemic protocols, attendance will be restricted this year.

“In the past, it’s always been open to the public,” she said.

However, this year’s event will not be open to the public, and buyers had to pre-register online.

“That’ll give us a chance to know our numbers,” she said. “They’ll get a wrist band to get access to the site. So, no wrist band, no access.”

Asked how many people are expected to attend in person, she said, “It’s going to be dependent on what restrictions are in place in March.”

As of the time of the Jan. 21 interview with Finseth, she said the plan was to accommodate 100 people in the main barn building. However, a casino and banquet facility on site will accommodate about as many more.

“We can set up their banquet facility with a live camera feed to the sale ring, and we can have an additional 100 people over there that will be able bid from that site,” she said.

“The best case (scenario) would be that we can just open it up and go back to normal.”

But for the time being, organizers are expecting crowd restrictions and are planning accordingly.

While there is a contingency plan also on the back burner in the event restrictions end up becoming tighter, she was reluctant to dive into those details and said that bridge would be crossed if and when they get there.

“We will have one — I don’t want to send it out there unless we have to use it,” she said.

“Either way, we’re going to have to be flexible and responsive to what the health requirements are going to be at that point in time.”

That means masks are going to be mandatory and hand sanitizing stations will be available, she said.

“Even just the way we’re stalling our animals and our consigners in the barn, we’ll try and keep them spaced out more than we have in the past.”

Additionally, the association plans to put on the event with “kind of a skeleton crew on site to run the bull sale.”

Since the number of people will be limited, organizers wanted to ensure as many buyers as possible could attend.

Consigners who have regularly attended in recent years will also be contacted and informed in advance about expectations, she said.

“We’ll stay in touch with all our of buyers from the last few years and make sure that they know what protocols are going to be in place, and what their options are in terms of bidding,” she said.

“We need to make sure that they’re up to speed on everything that’s going to be happening this year.”

Among the consignors are the following regional operations: Dallas Farms from Bowden, as well as MN Herefords, SNS Herefords, and YV Ranch, all from Rocky View County.

Perhaps a silver lining is to be found amidst the pandemic. Fortunately, the digital age has paved the way for opportunities that were not possible in the past.

The Calgary Bull Sale has for years already been providing an online component through a company called Direct Livestock Marketing Services that makes possible bidding virtually, she said.

“And so we’ve just added to that a little bit this year. We’ll be broadcasting the sale,” she said.

“We’re going to broadcast the show too, because people like to see cattle out and on the move.”

The COVID-19 pandemic seems to have pressed the pedal to the metal on a previously emerging trend toward the expanding use of digital auctions.

“Ranchers are a lot more comfortable bidding online,” she said. “It’s kind of been increasing over the years anyway, but this (pandemic) has really forced people to kind of get more comfortable with the technology, that’s for sure.”

Although the show has in recent years been hosted at Century Downs Racetrack in Balzac, its history’s roots reach back to the Calgary Stampede Grounds. However, while that was more feasible in the past, navigating the city’s downtown core has long since the days when the Calgary Tower was the dominant feature in the skyline become more cumbersome.

“We have a lot of people that want to buy their bulls — and they come from all over — and they don’t really like driving in downtown Calgary if they don’t have to,” said Finseth.

She added the association had over the decades developed a “really good relationship” with the Calgary Stampede and that the decision to change venues was merely a matter of convenience for their customers.

While the show must go on, one traditional aspect will be missing this year because of logistical complications involved in adhering to the health measures.

“We’ve always had a ranch horse sale in conjunction with the bull sale,” she said. “We’ve had to cancel that this year, just because it generally brings in a whole different crowd of people. And because our numbers are limited, we kind of needed to restrict it to just our bull sale buyers.”

Of course that being said, she added the association is optimistic about returning to business as usual next year and being able to bring back the ranch horse sale.

“They add a lot to our sale, and we feel bad that we had to do that this year," she said.

Also, a sponsors’ lunch that was previously part of the program had to be cancelled.

Even though technology opened doors that would not have been thought possible barely a decade ago, organizers and participants are lamenting the loss of the opportunity to bump proverbial elbows.

“Bull sales are a very social event, too. So, that’s kind of a down side,” she said about limited attendance and physical distancing measures.

“Obviously, we’re concerned about the health and safety of our consigners and our buyers that will be attending the sale," she said.

"We’re doing everything in our power to make sure that we can still keep the Calgary Bull Sale tradition alive. We’ve been forced to adapt.”

About the Author: Simon Ducatel

Simon Ducatel is the editor of the Sundre Round Up and a longtime columnist for other publications of Mountain View Publishing.
Read more