On Sept. 8, voters in the Banff-Airdrie riding had their first opportunity to hear candidates speak opposite each other in the lead-up to the Sept. 20 federal election.
Sep 9, 2021 4:54 PM By: Scott Strasser
Previous Next
1 / 1 Maverick Party candidate Tariq Elnaga speaks to the crowd at the Airdrie Public Library on Sept. 8. Photo by Scott Strasser/Airdrie City View
Expand
Previous Next

On Sept. 8, voters in the Banff-Airdrie riding had their first opportunity to hear candidates speak opposite each other in the lead-up to the Sept. 20 federal election.

The Airdrie Public Library-hosted event featured five-minute stump speeches from each of the candidates, followed by the opportunity for attendees to mingle with and ask questions to those seeking their votes. The event did not include a debate or questions from the audience.

Of the nine candidates vying for votes in Banff-Airdrie, eight attended the library’s event. The only no-show was Conservative Party MP and incumbent candidate Blake Richards.

Kicking off proceedings was Green Party candidate Aidan Blum, a 24-year-old resident of Canmore. During his stump speech, Blum outlined his personal background and the sense of political “disenfranchisement” he felt that led him to get involved with the Green Party. He said there is too much toxicity in the political arena, and that parties are getting worse at being able to collaborate across party lines. 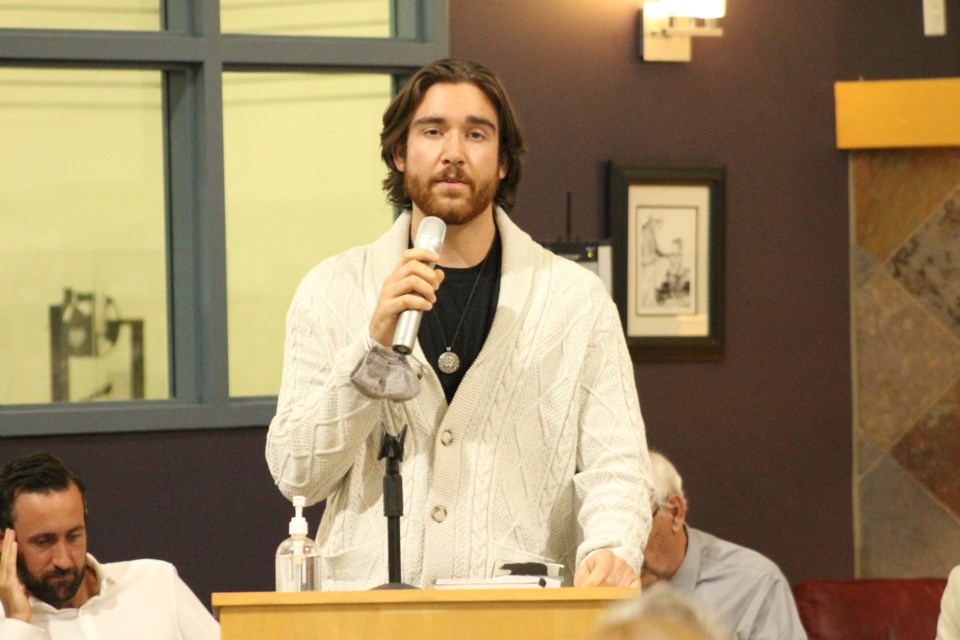 Much of Blum’s speech was devoted to the issue of climate change. He said there has been overwhelming evidence of climate change in western Canada this year, in the form of wildfires, extreme heat, and drought.

“I think one of the most important things we can do is understand the crisis for what it is, and realize Alberta has a very legitimate and impressive opportunity to be a leader for positive change in the transition toward a green economy, instead of pulling ourselves back with countless governments that refuse to act on this crisis that will cost us far more if we do not act,” he said.

Following Blum was Airdrie resident Tariq Elnaga, who is representing the western-focused Maverick Party. The newly formed party is notably only running candidates in conservative strongholds in western Canada.

Originally from the United Arab Emirates, Elnaga moved to Alberta after becoming enamoured with the ranching lifestyle while visiting the Calgary Stampede.

“I love the west and the western way of life – I live and breathe it every single day,” he said. “This part of the country was built on grit and perseverance. It was built on freedom, hard work, community, and on respect. The Maverick Party is an extension of those western values.”

Elnaga touted the Maverick platform, which calls for more Albertan autonomy on decisions surrounding the province’s energy industry, including the approval of pipelines and the cancellation of a carbon tax.

He said the ideal outcome for the Maverick Party on Sept. 20 would be the election of a Conservative minority government that would seek to be propped up by a coalition of Maverick MPs.

“The fact we’re not running any candidates in Quebec, Ontario or the Maritimes means we can focus exclusively on western issues and issues that matter to us as western Canadians,” he said. “We don’t have to appease a voter that doesn’t share or understand our values here in the west.”

Liberal Party candidate David Gamble followed Elnaga. During his speech, Gamble spoke about his identity as an “Alberta Liberal,” rather than an Ottawa Liberal. The Calgary resident added this means he is not opposed to the province’s oil and gas sector. 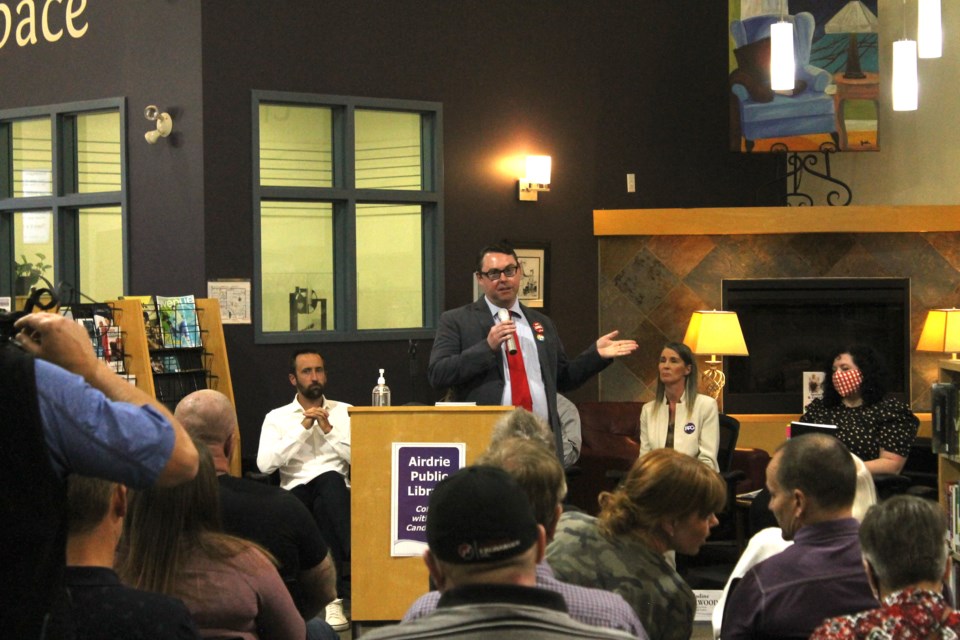 One of the more tense moments of the evening, resulting in some murmurs from the crowd, came when Gamble pointed out the division of candidates who were and were not wearing face-masks at the library’s event.

“I want to point out we have 50 shades of conservatives here,” he said. “Clearly we needed an election, because there is a lot more division than you might think there is. You might have noticed half of the people at the front of this area are not wearing masks, and proudly so. They’re probably also not vaccinated. I can assure you I’m double-vaccinated, as I am protecting my children.”

Derek Sloan, an independent candidate who was previously a Conservative MP in Ontario, followed Gamble. Sloan spent much of his time arguing how the current party system in parliament “is corrupt.”

“You would think you have 338 voices in parliament, because there are 338 seats,” he said. “But you have roughly four different voices because the party leaders tell everyone else what to do. If you colour outside the lines, you get kicked out. It’s a shame and it’s wrong.

“MPs, as their first priority, should be representing their constituents and no one else. They should bring their voice to Ottawa instead of bringing Ottawa’s voice to you.” 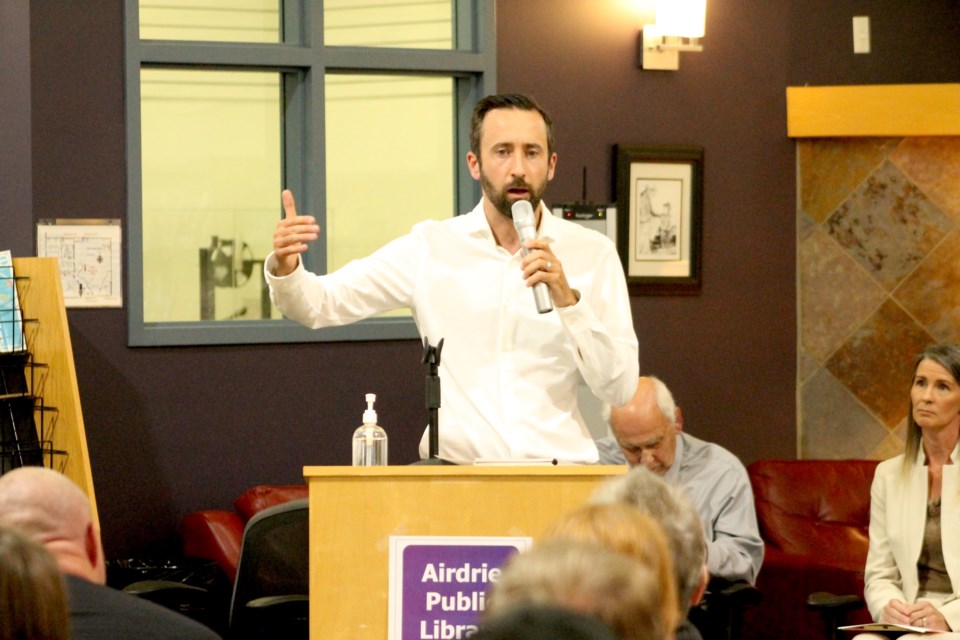 Sloan, who was ejected from the Conservative caucus last year, said he previously considered party leader Erin O’Toole a close colleague, but has since reneged on that relationship. He said O’Toole has flip-flopped on various campaign issues, including his stance on carbon taxation and gun control.

“He’s clearly willing to say anything to get elected, and I frankly can’t trust someone like that,” Sloan said.

Above all, Sloan said he hopes to oust Richards from his Banff-Airdrie seat, as the four-term MP is O’Toole’s party whip.

“I can tell you for certain, many MPs are fighting more for their pensions than they are for Canadians,” Sloan said. “They’re playing the game and they’re in the party system, where they’re told exactly what to do, and if they don’t do it and play by the rules, they’re out. That’s not what Canadians need.”

One of the more unorthodox candidates in Banff-Airdrie this election is independent Ron Voss, who is running in support of Alberta’s separation from Canada. If elected, Voss vows he will not go to Ottawa, and instead devote his MP salary to continuing Alberta's independence movement. 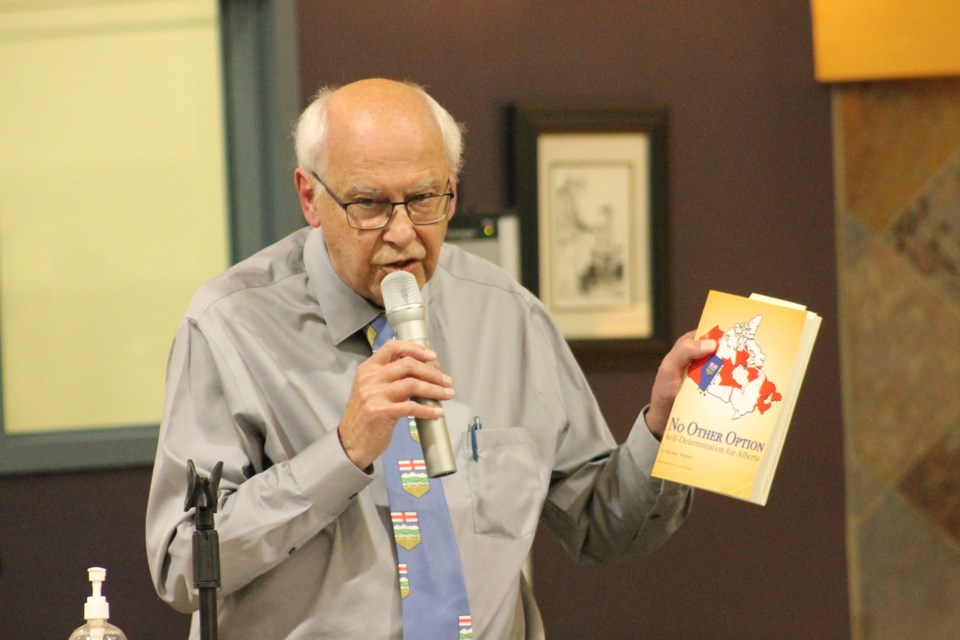 During his speech, Voss argued the current federal political system does not improve Alberta’s problems, and when Albertans put confidence in that system, the self-determination of Alberta fizzles out. He used former prime minister Stephen Harper as an example, arguing that electing a conservative party is not the solution to Alberta’s problems, as the party is always forced to cater to central Canada in order to stay in power.

“There’s currently no better indication of that than Erin O’Toole embracing Justin Trudeau’s net-zero emissions strategy, which means net-zero carbon emissions by 2050. What that means for Alberta is a net-zero oil and gas industry and net-zero jobs,” he said.

“I would presume Blake Richards, who is the whip for the [Conservative] party, would endorse the net-zero carbon plan. You want to send someone to Ottawa who wants to destroy Alberta’s oil and gas industry? I don’t.”

Following Voss was People’s Party of Canada (PPC) candidate Nadine Wellwood, a Cochrane resident of 16 years. She said the libertarian-style PPC is the only party that is focused on individual liberties and freedoms, and is advocating for a smaller government. 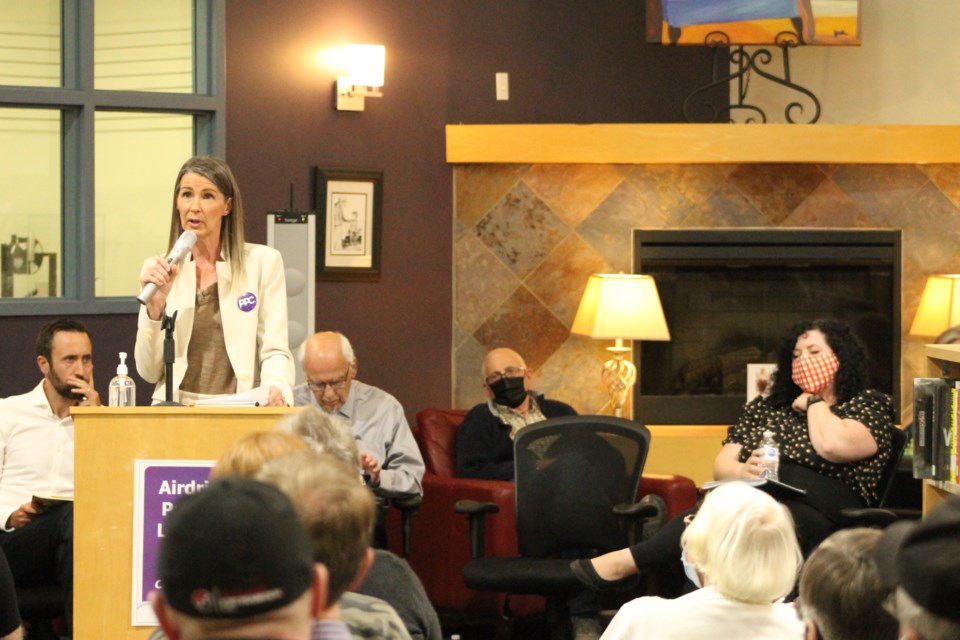 “Erin O’Toole, Justin Trudeau and Jagmeet Singh all share the same socialist ideology,” she said. “All their policies equate to bigger government and less freedom. The PPC is the only party that offers anything different.”

She cited the ratification of the bill of rights as one of the proudest moments in Canada’s history, adding the document legitimizes Canadians’ civil liberties.

“We have a bill of rights, a charter, and a constitution written specifically for times like these – times of crisis,” she said. “These are our protections from the overreach of a power-hungry government. What’s the point of having laws at all if the government can, at their own convenience, simply ignore them?”

Wellwood cited the impact of the COVID-19 pandemic on personal liberties in her speech, arguing governmental responses to the crisis have been oppressive. She said the PPC is the only party that is staunchly against the idea of a vaccine passport, and that Canada is on the road to becoming a totalitarian state.

“I’ve had people tell me I’ve simply confused temporary inconvenience for oppression,” she said. “Two weeks may have been inconvenient, but 19 months is oppression. Demanding people choose between their livelihoods and putting food on their table to feed their family or to take a vaccine is oppression.”

Following Wellwood was NDP candidate Sarah Zagoda, from Airdrie. A political newcomer, Zagoda followed in Blum’s footsteps by citing the threat of climate change in her stump speech. She argued the NDP is the only party that has a viable approach to tackling the issue. 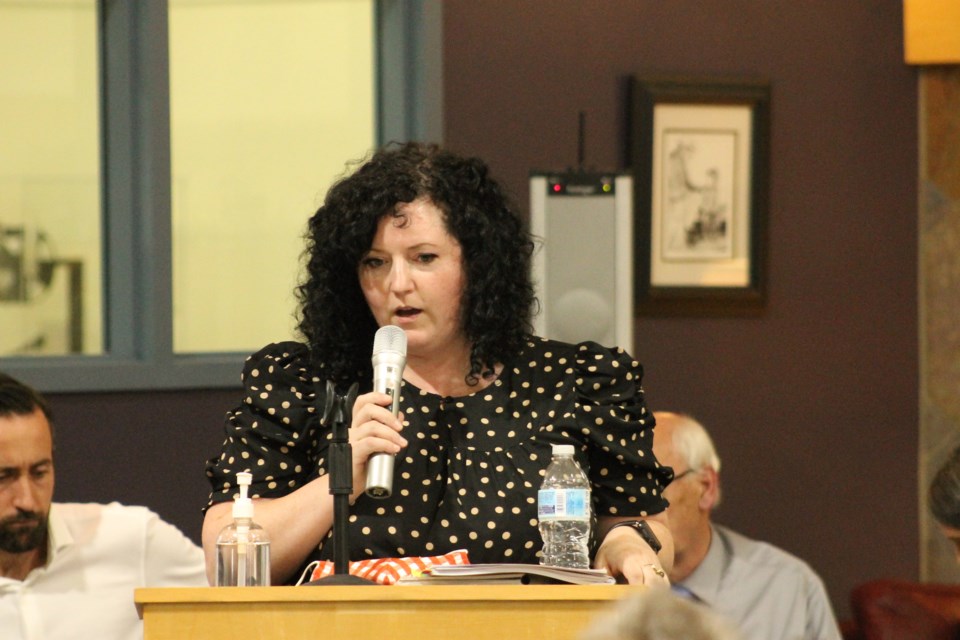 She brought up the Bow River glacier – the source of drinking water for the Banff-Airdrie riding – and how it is receding at an unsustainable rate, due to climate change. She said university studies indicate the glaciers in the Rockies could be depleted by as early as 2080.

“This is an actual emergency and it will have devastating consequences in Alberta if we don’t have [a plan],” Zagoda said. “We see the evidence everyday in the droughts, fires and air quality. We need leadership from a party that will take climate action seriously, and the NDP is that party.”

The last candidate to speak at the event was independent Caroline O’Driscoll. Having worked for 20 years as a teacher and lawyer, O’Driscoll claimed there is a fundamental misunderstanding among most people about how government works, specifically the three branches of government – the executive, legislative and judicial.

O’Driscoll said if elected, she would use her experience as a lawyer to demand transparency and accountability from governmental leaders and institutions. 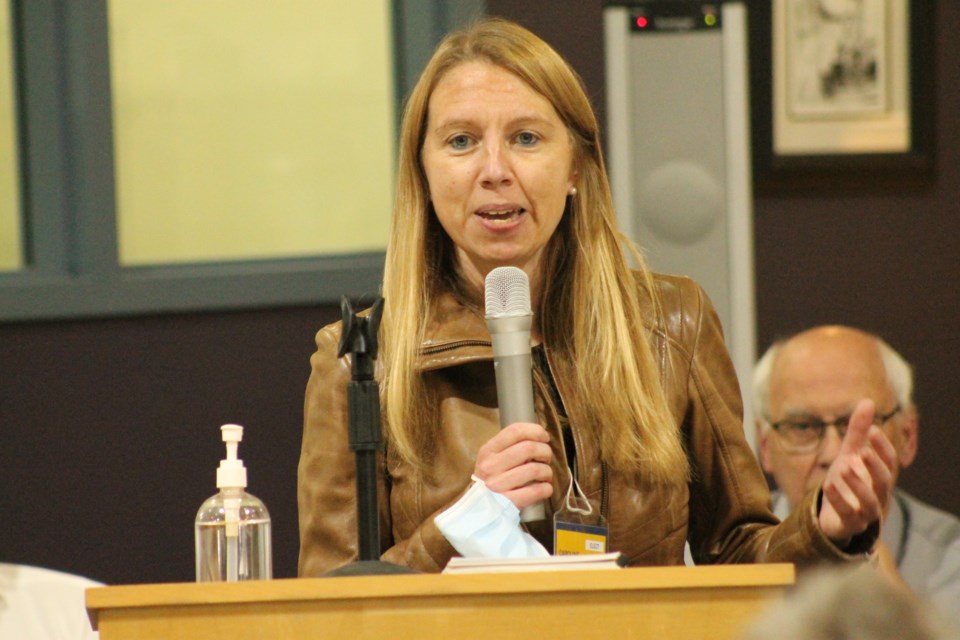 “I’m here to tell you I can be your voice,” she said. “I have proven success in advocating and demanding change. I stand for very simple principles that are fundamental to everyone – sustainable, equitable and accountable solutions are a win-win for everybody.”

The independent candidate ended her speech by arguing politics should not just be about visions and dreams, as is so often the case during campaign periods, but about making sure government is fulfilling its roles in the three branches.

“It has to be about making sure our institutions are properly taking action on the laws that are made and that everyone is held to account,” she said.