Old Town Pizza House Bar & Grill has been open for only eight months but has already made an impression on Airdrie, winning 11Best of Airdrie Readers’ Choice Awards – more than any other person or business.
Sep 21, 2020 4:00 PM By: Kate F. Mackenzie 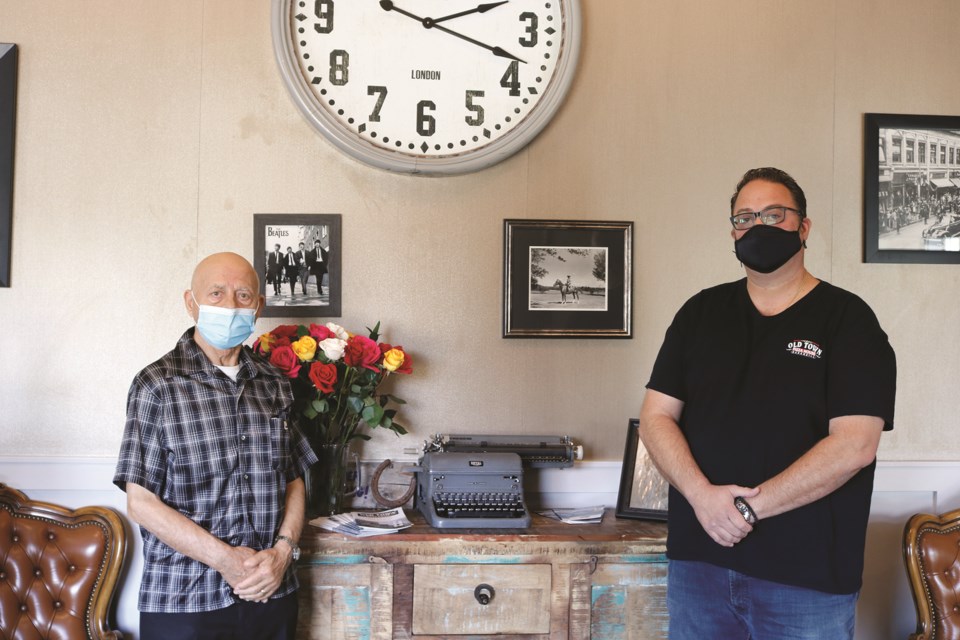 Old Town Pizza House Bar & Grill has been open for only eight months but has already made an impression on Airdrie, winning 11 Best of Airdrie Readers’ Choice Awards – more than any other person or business.

According to owner Paul Lappas and general manager George Kangles, the secret to their success is a “five-G formula.”

The five Gs also brought in the awards, including the Best Overall Restaurant in Airdrie.

“People want to come back because they know the food is good,” Lappas said.

Kangles said when creating the menu, they wanted to provide the best quality food at an affordable price tag.

“We talked to our food supplier...and for example, we said, ‘Give us the best prime rib burger you have, we want to stand out and we want some wow factor,’” he said.

After trying 13 different burgers, they decided on the most expensive option: an eight-ounce prime rib burger, which won Gold in the Best Burger category.

Old Town Pizza House’s dedication to serving high-quality food at a reasonable price also paid off with a Gold award in the Affordable Eats category. The restaurant offers a $10 special every day of the week, Kangles said.

The restaurant’s made-from-scratch pizza, wings and overall lunch options were each awarded Gold. Their pasta, fries and takeout were each rewarded with a Silver, and their fish and chips and appetizers received a Bronze.

"Our pizza is a Greek-style medium-thick-crust with heavy toppings under a lot of cheese," Kangles said. "It's rare for a customer to ask for extra cheese because it comes automatically."

Finding a great location – the third G in Lappas and Kangles’ winning formula – was fulfilled by opening along Edmonton Trail, which attracts new customers who can find easy parking. However, Kangles said most of their customers are returning diners.

“Seventy per cent are repeat customers,” he said. “We have a good relationship with them.”

The positive customer relationship comes from a dedication to creating a personable atmosphere, which is evidenced by Lappas greeting every single person that walks through his restaurant’s door.

“Our staff is trained not to treat customers like numbers,” Kangles said. “You get to know them on a first-name basis.”

Kangles added their customer demographic ranges from infants to customers who are almost 100 years old.

“We cater to everyone in between,” he said. “The restaurant has a different family-feel atmosphere and the lounge has a more adult feel with louder music. There are two different environments under one roof.”

Old Town Pizza House’s community bond goes beyond getting to know their clientele, Kangles said – giving back is important to them as well.

“We do corporate sponsorships and sponsorships with sports teams. The first team we’ve sponsored so far is the Airdrie Highlanders rugby team,” he said. “We help in fundraisers and we offer our banquet room for events. We’re all about the community.”

Lappas and Kangles said they are humbled, grateful and “extremely happy” to have won so many awards.

“We know that we couldn’t have done it without the support of our customers and our staff,” Kangles said. "We're here to create a second to none experience."